Because I wanted to talk to...David Baillie (Part One) 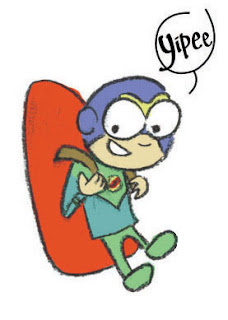 David Baillie is a talented cartoonist living and working in Mile End in London. He's also an illustrator, writes comics journalism and is currently busy with various personal writing projects. I spoke to him about the realities of life as a working artist and writer, his work for the Judge Dredd Megazine and flogging his wares down Camden (no, really).
NB: Examples of David's mini-comics can be found online at his website.

David, please tell us about yourself.

Let's see... For those who haven't met me, I look a bit like a young Paul Newman. Perhaps a little meaner ‘round the eyes. I was born in Scotland some thirty years ago and spent my youth reading comics and hunting haggis. I moved to London to see where the haggis (plural of haggis) go when we send them south of the border. I'm still not sure. I also make comics (writing and drawing) and do a bit of designing. On a good month this pays the rent. Otherwise I hunt haggis on the mean streets of the East End of London.

Most self-published cartoonists make comics in their spare time. You decided to go freelance as an illustrator and make comics as part of that. What made you take 'the leap' considering you had a stable job (arguably an easy life)?

It was an easy enough decision. I hate the idea of wasting my time on Earth - we don't get that much of it! The job I had was actually great - it paid well, I toiled alongside some really nice people, the work was usually interesting and my desk overlooked the river Thames. But if they hadn't been paying me, I wouldn't have been there. I'd have been at home making comics. So that’s what I should be doing. Oh and I hate commuting.

What advice would you give the you that started making comics three years ago?

Don't be so shy! It took me far too long to approach publishers and present myself as a potential freelancer. I spent the first year timidly sending things in, and almost apologising for doing so. I still don't think I'm quite there, but I'm getting better at it. If you look at the people that 'break in' quickly (and not just in comics, but any creative field) they tend to be bold and self-confident. Like Worzel Gummidge, I think any new freelancer has to have that head ready to stick on. Even if they replace it with their shy head after they've written their cover letter or made that phone call. Oh, and I'd also tell my three-years-in-the-past self to learn how to draw hands properly. Sheesh.

Which are your favourite comics, small press or otherwise?

That's a tough one. I love Chris Ware. The last Acme Novelty Library I read - The Annual Report to Investors - was breathtaking. He takes the grammar of comics and bends it to whatever shape best fits his story. Mike Carey's Crossing Midnight is a great read, and I hope it's doing well enough to continue because I need to know how it all turns out. I used to be a Vertigo junkie, but the only other title I read from them now is Y The Last Man. Oh and 100 Bullets, although I've lost track of what's going on and might have to go back to the start. I still read 2000AD every week, and it's mostly really good. My favourite comic ever is Hewligan's Haircut (which was in progs 700 and up). Well actually joint favourite. Alex Robinson's Box Office Poison gets a gold medal too. I also really like Dan Hipp's stuff. When I read the online preview of Gyakushu I was green and gooey with envy.

In terms of the small press I voraciously read anything by my friends. Oli Smith's autobiographical meanderings are always thought provoking (I really liked a recent one he did about a night time stroll with his girlfriend). Douglas Noble's Strip For Me is the Bergman of the indie scene. Daniel Merlin Goodbrey's stuff never fails to entertain. His new web- strip is really fun. I've said it before and I'll say it again: Tales from the Flat is the Watchmen of the UK small press. Or maybe even Cerebus without the misogyny. When complete it will be a 100-issue odyssey charting the lives and loves of the flat dwellers, and when read in one sitting will induce Spiritual Enlightenment. Anything by Gary Northfield. And Sean Azzopardi. And Bridgeen Gillespie. Also - Monkeys Might Puke is a must-read. But don't come crying to me later if it upsets you. Actually come to think of it, it wasn't that tough a question...