Because I wanted to talk to...Matt Smith 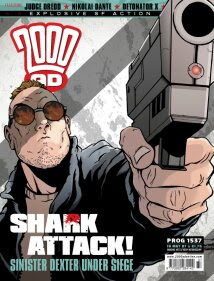 The other day I posted a short Q&A with writer Rob Williams that I had conducted for an article about writing comics. Here's an even shorter one with 2000 AD Editor Matt Smith. Matt gives us the inside track on what he thinks makes a perfect Future Shock (the five-page shorts that are usually the entry point for writers new to 2000 AD) and various other top tips about writing comics. If you're pitching to Matt, then it's worth taking a look at what he has to say:

What, in your opinion, makes the perfect Future Shock?

An original idea, with exciting visuals, a strong plot that will hook the reader, and a twist that feels natural and has some ironic bearing on what has gone before, rather than just throwing something in that won’t mean anything to the reader.

What are the most common mistakes novice writers make when submitting comic scripts to you?

Not formatting a script properly. Thinking that an idea makes a story, and stretching what should be one scene into five pages. Too much dialogue, or characters that are insubstantial. Thinking that nobody’s done an alien invasion or a virtual reality prison story before.

How detailed do you think a comic script should be (is your personal preference John Wagner or Alan Moore in terms of level of detail)?

It entirely depends on the what’s happening in each individual panel, but generally panel descriptions shouldn’t really be much more than about five or six lines. I think artists like to be given a certain amount of free rein. My general preference is for the terse, Wagner-style script – you can usually tell enough of what needs to be contained in a panel simply by the dialogue.

What role do you think the small press can have in developing a writer?

The difference between a written script and seeing it realised as a comic strip can be quite big. What might look like an exciting story in script form could become clumsy and disjointed once its rendered visually. So the more practice you get writing scripts and seeing the finished product can be invaluable in showing you what works and what doesn’t, and where things can be improved. The practical experience of working on small-press titles is something that should be considered by anyone who wants to write comics.

Matt Smith, thanks for your time.
Posted by Matt Badham at 02:32