Because I wanted to talk to...Rob Williams. 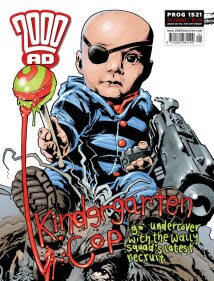 Some time ago I did a very short Q&A for a writing magazine with Star Wars, Wolverine, 2000 AD and Judge Dredd Megazine writer Rob Williams about writing comics. Here's the result:

What, in your opinion, makes the perfect 2000 AD story?

The usual suspects - action, drama, suspense and a gripping cliffhanger or a major plot revelation that should, preferably, be a surprise come the finale. Pretty much all stories could do with these things, of course. For 2000AD you probably want to throw in a spot of satire and an acerbic sense of humour too, and some killer futuristic or fantasy visuals, of course. This is a visual medium after all. One thing 2000AD doesn't really do is ponderous. You've got five pages - so keep the pace up. There's a lot to compress in there, although a beginning - middle - end is paramount.


What were the most common mistakes you made as a novice writer?

Over-writing mainly. Economy in your dialogue is amazingly difficult, but the best writers can say a lot with very little. When I started I think someone told me that Alan Moore had said that 28 words a panel was the maximum and I tried to stick to that. These days I aim for a lot less. Similarly with the number of panels on the page. I still struggle to keep that under six sometimes. Less is more, as the cliche goes. It's true. Comics is a visual medium. Always remember that. if you look at the page and you've filled it with text then you should be writing prose instead.

How detailed do you think a comic script should be (is your personal preference John Wagner or Alan Moore in terms of level of detail)?

Somewhere in between, I think. No one can beat the infamous two-word Wagner Dredd panel description for pure economy: 'Dredd. Grim'. I tend to ask a lot of the artist in terms of sometimes describing the ways the characters should act with their facial expressions etc, especially when trying to write comedy. It really is dependent on the amount of information you want to get across. You have to strike a balance between giving the artist all the info he needs to convey the visual the way you want as the writer, while also allowing that artist the freedom to come up with the image himself. He is drawing the thing, after all. It's a collaborative art form.

What role do you think the small press can have in developing a writer?

The only way to improve as a writer is to write... a lot. Small press publications provide avenues for writers to develop comic scripts, collaborate with an artist and see how your perfectly imagined visuals work when actually drawn on the page (it doesn't always come off as well as you'd like), all of which is vital. And even though you may have read comics all your life and think that you have a pretty good idea of how comic scripting works, it's not until you get into the nuts and bolts of trying to pace a story on the page that you realise how difficult it sometimes is. The small press allows you to work on your craft before you approach the major companies, and that's invaluable.

Rob Williams, thanks for your time.
Posted by Matt Badham at 12:11