Because I wanted to talk to...James Nash (Part One) 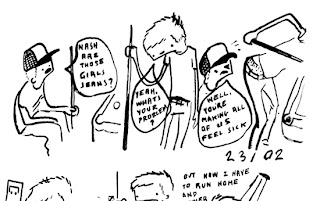 It's all gone a bit mainstream round here. To balance that, here's a chat that I had with James Nash. James is one of my favourite cartoonists.

Please tell us a little about yourself.

Sure, my name is James Nash, I’m 25 and I currently live in the West Midlands area since graduating from the University of Brighton about three years ago. Basically I do a bit of work as a freelance illustrator as well as personal work that has mainly come to fruition in the form of making small press comics that I’ve been showing and distributing via various means during this time…

How did you first get into self-publishing?

I started making a daily diary drawing during my last year just to explore the idea that the subjective language of comics could communicate something as objective and personal as a person’s diary. About a year later I began putting the drawings together as a collection and along with some friends similarly interested in comics began exploring the idea of self-publishing our work and distributing it via the small press community.

Isn't a person's diary a subjective rather than an objective document and that's what makes it personal, that it reflects their subjective view of the world?

I mean objective on behalf of the reader. Maybe I'm misusing the term, but I mean in the way that you could read someone else's diary or look at their holiday photos or whatever and those things might bare no frame of reference to you, you look at them objectively.

Whereas I think there’s a goal in the visual language of comics to make something readable, that refers to the reader as well as the writer. My favourite thing is having someone tell me that something feels exactly like it had happened to him or her, or that they thought it was only them that thought about something a certain way.

So, just to clarify, it's about the reader being able to locate themselves within the diarist’s perspective, to fully empathise with the diarist? Is that correct or am I missing something?

(Also, please expand on this statement a little: 'Whereas I think theres a goal in the visual language of comics to make something readable, that refers to the reader as well as the writer.')

Yeah, that’s exactly what I mean. It brings about a different way of thinking about what to write and how to make certain subjects or events readable and relatable to someone else. It was only really a while after starting the project that I became aware of how big the spectrum of people making comic diaries or auto-biographical work that was similarly about nothing in particular is (I suppose as a reaction to the perception of comics as a medium synonymous with fantasy). But it was good to examine a lot of stuff and find out what I liked and what I didn't and why that was.

For example, I really like Vannessa Davis' really loose and beautiful artwork and the way the narrative is pretty focused on one point, and Gabrielle Bell's minimalist drawing complementing the larger focus on words, plus I really related to the subjects in their comics. I feel a bit more negative towards stuff by Jeff Brown and Jeff Lewis. The latter I don't think even needs to have any drawings because of all the text. I don't feel like it uses being a comic to its full strengths.

Even with such a seemingly unfocused and ephemeral drawn record of a day like this I think there are still a lot of choices to be made if you want to collect something communicative and meaningful as the end product. I'm not saying my attempts are effective examples of this, but I think its good to have a vague idea of why you're making something otherwise, well, why are you doing it?

Anyway, as I mentioned above, I started doing it as an explorative project, it was also a reason to actually just make an unselfconscious set of drawing and writing. I think because there’s a point in an education of visual communication where it becomes impossible to make or do anything without questioning yourself impotent, so it was a good way to set a tight self-initiated brief where the object was to just do something, anything, because that’s what’s real at that time and that’s what is going on.

The rule is simple: I do it on the day or not at all, so that the drawing itself would maybe reflect what the drawing was about. Over the period of four and a bit years that I’ve been doing it certain qualities have become more and more uniform, to the point where one would recognise it as a deliberate style or cartoon type quality: i.e. its structure has developed into something a lot more ‘readable’ I suppose. The subject is simple, its usually something small; just something someone has said or some thoughts on something or someone.

I try not to make too many self-reflexive drawings such as writing about what a ball-ache it is to have to draw it, although many have been committed to paper… My other favourite thing about it is experimenting with the three panel narrative structure. If something worthwhile of writing occurs, how do I fit it in communicatively? The same of the opposite: how do I stretch nothing over three drawings? The possibilities still seem really infinite and I hope to carry it on as long as possible.