Because I wanted to talk to...Ellen Lindner (Part Two)

(Part one of this interview is here) 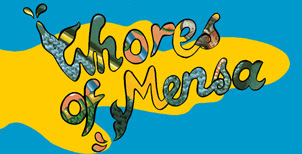 Please tell us about your work for anthology comic Whores of Mensa.
I really love working on Whores of Mensa. It's like a zine, or a no-censors verion of a girl's annual…we have a lot of fun with the stories. I actually became involved with Whores of Mensa because I wrote Mardou, the editor, a fan letter. She, Jeremy Dennis and Lucy Sweet were already working on it. I loved the mix of styles, and the humour of their strips…there's one Mardou did about Mr. Miyagi of Karate Kid fame that made me laugh for days. Anyhow, I think it's important to keep the DIY aspect of comics going in the glossy graphic novel age, and Whores of Mensa is great if you like witty, intriguing comics by girls. We're hoping to do an anthology…I think an art show would be really good, too…Jeremy's originals are pretty neat. Mine are a mess but maybe I could knock up some new ones! I think the next issue will be really fab…it has a Parisian theme, and I've got lots of ideas, some autobiographical, some involving my current obsession with mystery stories. Maybe we could publish a French edition! "Les Putes M.E.N.S.A"…
You have a clean, crisp art style. Who are your influences and how did you arrive at that style?
I remember once going to a friend's house when I was fairly young, and some relative had just brought a giant box of old EC comics out of the attic…Tales from the Crypt and such...they were amazing! I think they made a big impression on me. Even the newspaper strips I liked were more in the realist vein, though I loved the stylized look of Dick Tracy, for example. Marc Hempel, who drew some of the later Sandman stuff, and Dan Clowes were both big influences when I hit my teens…though, I have to say, some of the artists I like the most nowadays have a more cartoony style, like Dominique Goblet or Pauline Martin, two French artists whom I really like. A big influence in the last five years or so has been American romance comics from the fifties. I have a friend in New York who has a mammoth collection, and she was kind enough to let me go through and scan some for reference. They have a reputation for being dashed-off and sloppy looking, but there were obviously some illustrators who very much enjoyed working on them…the level of detail is amazing! I paid tribute to them in a strip I did for a Camberwell show called WAVE…I love taking the old melodramatic images and writing my own stories.
What are your thoughts on the small press scene in this country? What's good and bad about it?
I think the level of enthusiasm is really great in the UK comics scene…I love local festivals like Caption. And stuff like the Observer prize is totally unique, I hope it'll go a long way towards making people respect comics as a literary form. Plus there are people like Paul Gravett who serve as really invaluable ambassadors for comics..all of this is so important. My only complaint is that I miss the drinks nights Gosh! used to organize in Central London…bring 'em back, boys!
Where can people find your work?
My graphic novel, Undertow, is online at Web Comics Nation. I'm currently posting the third chapter, so it's not too late to catch up! Whores of Mensa is available from the Forbidden Planet shop, and from Ted May's It Lives! shop if you're outside the UK. I've also been in a bunch of American anthologies: Scheherazade, published by Soft Skull Press, and Hi-Horse Omnibus, published by Alternative Comics, are two I would recommend. Or you can check out my website and blog.
What next for Ellen Lindner?
At the moment, I'm just relaxing…getting my Aladdin book done on deadline meant a lot of long nights, and I'm nursing a terrible cold as a result! That said, I have two April deadlines, swiftly approaching…I am working on a new Whores of Mensa story, for our Paris-themed issue, which is planned for release during the summer festival season. Robyn Chapman, who is an amazing cartoonist and Center for Cartoon Studies lecturer, invited me to be in her Hey, 4-eyes! zine, which is dedicated to the culture of spectacles. I am writing a story about the daft things people have done through history in order to stop wearing their glasses. And I'm adapting an E.M. Forster sci-fi story for the Graphic Classics line of books. Also I have some comix-themed travel coming up – I'm visiting Mardou in her new hometown of St. Louis, Missouri, otherwise known as the most up-and-coming city for comics in the US.

I'm excited!
Thanks, Ellen, for taking time out of a hectic schedule to talk to Overspill.
Posted by Matt Badham at 03:31