A chat with...PJ Holden and Al Ewing (part one) 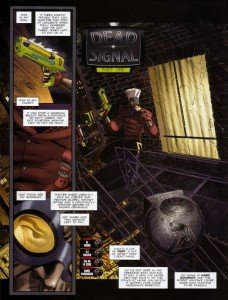 (Above: Dead Signal art by PJ Holden)
Earlier this month I interviewed artist PJ Holden and writer Al Ewing via Google Chat. We were supposed to be talking about Dead Signal, their new series for science fiction comic 2000 AD. Instead, we rambled on like lunatics.

Al Ewing is an up and coming young writer who works mainly for 2000 AD, although he has also written two novels. In this interview he also talks about Tempest, his 'ninja judge' strip that has been running for the last five months in the Judge Dredd Megazine.

PJ Holden is a comic artist who has worked for 2000 AD, Image Comics and Fantagraphics.

MB: Tell me about Dead Signal.

AE: The original idea for Dead Signal was basically as you see in the first episode, televised bounty hunters driven by debt in a world that has a lot of insane and black-humour twists on our own.

AE: Matt Smith, editor of 2000 AD, took a look at it and decided it was a bit unoriginal, or it needed something. The original plot was very... it was kind of a buddy movie. He suggested the cliffhanger for the first episode, the debt I was threatening the lead with being called in. At this point I decided that this didn't really go far enough, so without spoilering it I decided to blow up the whole thing.

MB: Do you mean that you rewrote it?

AE: By the end of the first series it'll be at a very different place, and hopefully if the readers like it we'll be launching something more ongoing from that. By episode five you'll know exactly what I'm talking about. I blew it to pieces. Tell him, PJ!

PJ: I can say nothing. Except. I had to laugh when I saw that someone pegged it as a typical 2000 AD bounty hunter series. I thought 'hmm... not nearly by half it isn't...'

MB: OK, chaps. Rewind a bit. Give us a Dead Signal pimp. Why should we read it, in art and script terms? You've gone all postmodern aintcha!?!

AE: It's basically the furthest Matt's allowed me to go so far.

AE: He's really let me do whatever I wanted, both in terms of story and art. By which I mean that I've been given PJ, who can do anything and cheerfully agreed to. Best artist I've worked with and I'm not just saying that because he's here.

MB: Are we talking a mix of art styles then, PJ?

PJ: The art. Well, I'm trying my little heart out. I thought long and hard about how I was going to get this series to look unique and how I'd be able to play with the art in the different levels of... well, I can't say too much.
But, you know the flashback panel in the first episode where the series goes from noir to cartoony and back to noir again (drawn in a very weak approximation of the style of Little Nemo in Slumberland)? Expect another change in art to reflect the difference in the story. It was easily the toughest thing I've drawn, and, I think, for a typical 2000 AD reader the episode with that change in will be the most difficult episode.

MB: The first episode is a good set-up. I wanted to read more

AE: I'm a bit paranoid about reader reaction. They like it now, but...

PJ: Al, I don't think there's any point in worrying about it. I've never really managed to peg how readers react (I thought they'd love Warzone*, they didn't).
MB: At first glance Dead Signal looks like a satire on celebrity culture and reality TV, but you're saying that it's going to go off in mad directions.

AE: It is both of those things. There's a lot of satire, but there are other levels that it's going to go to.

MB: And these are formal levels, in terms of how it's presented and the mechanics of a comic strip? In terms of the grammar of comics?

AE: Kind of... it's a bit hard to talk about this without setting up a massive spoiler. But yes, we do play with the formal aspects in a couple of places.

MB: How challenging was that for you as an artist, PJ, or was it fun?

PJ: It's been tough. It's my first completely new thing for 2000 AD, so every part of that world is out of my head, and you make decisions, sometimes, that don't play out as well as you like, but it's allowed me to push myself. There're some interesting things in episode five that on paper were really simple, but, when you go to draw them, are insanely difficult. I think that episode is nearly my favourite because it's so radically different.

PJ: Looking back over the art, irritatingly episode one, I think, looks the best. Page one, especially. We're looking at a kind of gritty ‘70s New York with a character that's loosely inspired by Brendan McCarthy’s sense of design. The level of grit is about where I'd like every episode to be.

AE: I love the chase in episode two. I thought that came out really well in the black & white art.

PJ: Actually, anything with the city in it I like. I just like this made-up ‘70s New York we’ve got in the strip (not really what it's like, but kind of filtered through the brain of me, age 11).

MB: Given that we risk spoiling Dead Signal, let's talk a bit more generally about 2000 AD and your art and writing? Where do you see yourselves in terms of your comic careers? What has Dead Signal allowed you to do in terms of taking yourselves to the next level? And what's your next career move (horrible term)?

PJ: Well, we're both off to the New York Comic Con and I'm taking about six months off cus of my new baby, so career on short-term pause.

(Above: advert for I, Zombie)

AE: Well, personally it's given me more confidence about what I can pull off, which I'm translating into a Dredd ten-pager at the moment. Next career move is going to be to write another novel, for myself this time - plus I need to talk to Dom Reardon about doing something for Image. We talked at the New Year about that but nothing happened. I need to get some old files off an old computer, and what with writing I, Zombie [a novel] I've not had a chance to dig out all the cables and the old monitor etc.

MB: What's I, Zombie about?

AE: I, Zombie is a bonkers story of a zombie detective learning the mystery behind his origins. It involves shooting, werewolf chases, the end of the world and giant man-eating worms, and one of the characters is very clearly Philip Glenister.

MB: This trip to New York is a bit of a networking opportunity...

PJ: Maybe something will come from the New York trip, maybe it won’t.

AE: It'll be nice just to see the Americans, and their ways. They tip their bar people. It's madness. You eat peanuts right off the bar and drink out of bottles instead of proper pints. Or so I hear.

PJ: Al's emailed me about where he can push the envelope of Dead signal next. So, if it goes down well (and if the website is any indicator it seems to be) there'll be more Dead Signal.

Go to part two, three, four or five of this interview.

*Warzone is a Judge Dredd strip by John Wagner and PJ Holden that received a mixed response. Here's a review of the first episode (scroll down slightly).
Posted by Matt Badham at 12:28

You might still wonder why we're so sure about fast delivery for RS Gold. Large instock and a professional instock team can take the credit. They will replenish the instock after one order is delivered, so our stock is always ready for your order to WOW Gold. Every penny you spend here is completely worth it! WOW Gold

It'll be nice just to see the Americans, and their ways. They tip their bar people. It's madness. You eat peanuts right off the bar and drink out of bottles instead of proper pints. Or so I hear.
Cheap League of Legends Boost
Buy League of Legends Elo Boost