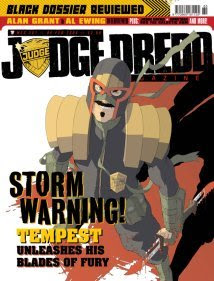 (Above: Tempest cover art for the Judge Dredd Megazine by Jon Davis Hunt)

This is the fourth part of an online chat that I had with artist PJ Holden and writer Al Ewing earlier this month. Here are parts one, two and three.
MB: You're a bit of a Lee/Kirby/Ditko man aintcha, Al?

AE: Yeah, I do love my Kirby and Ditko. Lee, less so, but he was a vital component. And Lee did do that jazzy True Believer talk that I've got a lot of mileage from pastiching over the years.

Al: I'd have to read so much Ayn Rand to do that justice.

MB: What can we learn from those '60s Marvel bods?

AE: Three words: Done In One.

MB: Done in one issue? Continuity - lots of fun or the Devil incarnate?

PJ: Continuity - fun when you can keep it fuzzy, otherwise just a giant pain in the ass.

AE: The sheer amount of genius they regularly packed into those very early issues - I'm thinking Fantastic Four around the Galactus period, the Ditko Spidey and Dr. Strange... and it was before they just started recycling their old concepts - which I'm guilty of in the Dreddworld - so it was all new and all mad. And all pretty much done in one issue! Three episodes was an epic. Galactus took fifteen in the Ultimate universe.

(Above: interview with Jack Kirby that I stumbled across while looking for a Galactus image)

PJ: There is /was a sense that anything could happen - new characters exploring new worlds and meeting new giant universe-eating aliens. Now, it feels like the readers already know everything that has/will have happened.

MB: I wondered about that, Al. You reference Dredd continuity a bit in Tempest. Necessary or the fan boy in you?

AE: The thing about Dredd that makes it work is continuity. Barring those early episodes with fat policemen running around it's a really structured world, and it's the only comic universe that operates in real time. Whereas Spidey isn't 100 years old or whatever he would be by now. With Dredd, John Wagner basically created a perfect storytelling machine, and delving back into the past is one of the many, many ways of bringing water up from that well, and it's the one I'm most comfortable with. On the other hand, I'm conscious that that's the exact thing I don't like when a lot of American writers do it with their childhood heroes, so I'm trying to do other things.

MB: How is a Dredd strip the perfect storytelling machine?

AE: Dredd as a whole - the whole world. You can tell any stories with it. It's a beautiful machine made out of a million parts, all of which you can pick up and play with or examine in detail. Although to actually drive the Dreddworld you need to be fully qualified and I'm not that. In fact, a story in itself is a kind of machine - a machine for taking people places. And the variables of the machine are how many people you want to take with you and how far you want to take them.

MB: Tell me about Dead Signal in terms of those variables.

AE: Obviously I'm trying to take as many people as possible as far as possible, but we're taking the machine through some strange territory and we're probably going to lose some people, who will remain drifting forever in idea-space. But with Dead Signal I think getting to that faraway place is the important thing. People can always catch up if they need to.

MB: But that's a sacrifice you're prepared to make for an interesting comic strip?

AE: Yeah, whereas with Dredd I want to drive a big bus to a fun, seaside destination.

MB: Dredd should be familiar?

AE: It should be a fun day out for all the family and not a harrowing trek into the unknown. I think it should be surprising in what it does but familiar in what it is. It's a big, wonderful world, but it has rules. I can't have Dredd be a Skrull.

MB: PJ, are you referring to message boards?

Al: Worst thing is that there aren't enough good comics and too many rubbish ones.

AE: They're still around.

PJ: Blimey, where to start?

AE: You can do anything with comics. Literally anything.

PJ: They can do ANYTHING. They can be ANYTHING. You can create one with thousands of pounds worth of equipment or with a pencil and some paper.

MB: Is that what Dead Signal is about? Pushing the boundaries in terms of comics and 2000 AD?

AE: No, Dead Signal is about people shooting each other. Zarjaz!
Go to part five of this interview.
Posted by Matt Badham at 12:25

You can tell any stories with it. It's a beautiful machine made out of a million parts, all of which you can pick up and play with or examine in detailBuy LOL Elo Boost
Buy League of Legends Coaching